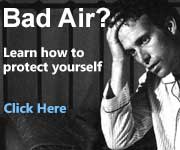 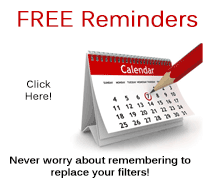 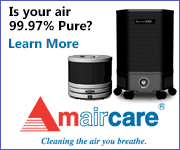 Ozone is a molecule composed of three atoms of oxygen. Two atoms of oxygen form the basic oxygen molecule--the oxygen we breathe that is essential to life. The third oxygen atom in ozone can detach from the ozone molecule, and re-attach to molecules of other substances, thereby altering their chemical composition. It is this ability to react with other substances that makes ozone such a powerful sanitizer.

When the extra oxygen atom splits off from the ozone molecule, one of two things happen: disinfecting and oxidation. As a disinfectant, these atoms quickly destroy the bacteria, mold, mildew and the odors they cause when they come into contact and leave behind only oxygen.

When generated, it seeps into crevices, carpets, drapes, furniture, and under beds where normal air currents are minimal or non-existent.

A. Ozone may well be the only deodorizing product useable when the customer suffers from severe chemical sensitivity. Most all products used in deodorization will leave some residue in the air or on surfaces. These residues can produce severe reactions from those people who are highly sensitive to chemicals. Ozone, on the other hand, dissipates completely within a matter of minutes (the crisp smell left in the air is usually attributed to the absence of normal odors) and leaves no lingering residue to upset sensitive persons.

B. Homeowners complain about strong fragrances left by some deodorizing chemicals, ozone may be used to correct that situation within a short period of time.

C. Moisture sensitive surfaces and fabrics that require deodorizing can be treated by ozone {exceptions are elastic and leather). Clothing: Draperies, books, paintings, and unfinished wood can effectively be deodorized using ozone properly.

D. Because ozone gas employs the principle of oxidation, (a chemical reaction) once the odor is gone, the results are permanent.

E. Water infiltration situations, which create odor generated by microorganisms on unfinished wood. In basements, or on interior wall wood, insulation or drywall may be effectively treated using ozone. Ozone can penetrate complex structural surfaces and destroy odor-producing microorganisms at their source. In low concentrations ozone can control the germination of mold and mildew spores while drying takes place.  (This procedure should only be used by the cleaning and restoration specialist)

G. Ozone works on a molecular basis. With proper encouragement (air thrust) it can penetrate into small cracks and crevices that may be impenetrable by chemical deodorants

Important!
These ozone generators produce very high levels of ozone, they are only to be used in unoccupied rooms!

Ozone generators are not air cleaners, and are not safe to use while the space is occupied.